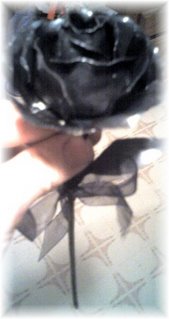 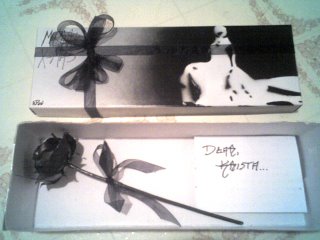 The box is a stencil of the recipient doing a ballet move, apparently in the hallway at school. Nick removed the lockers and made a stencil of her and spray painted it on to the box. A box that he cut down and rebuilt to fit the rose. He tied the black ribbon on and placed the rose inside. He explained to me how he went about cutting, soldering and bending the metal but there is no way on earth I could explain it to anyone else. I am as amazed by the little doohickeys under the rose as I am the petals. The stem is textured, too. It really looks to me like a rose that was magically touched and petrified while in its prime.

Lisa - this is amazing!!! Nick is so talented. What a special, special gift (and quite a romantic one at that....mmmm you could be right about the girlfriend comment).

He obviously has inherited some of your fabulous creativity!

Wow...you have every right to go on - it is fabulous!! I bet she was tickled down to her little toes...

THat totally ROCKS! I think it is remarkable! For a guy to put that much meaning into a gift is beyond words. What a great kid! ACTUALLY...I am quite blown away.

OMG Lisa. He is VERY talented. I have been to high class, meaning best of the best, art shows where they have steel and other metal sculpture art, and this rose blows some of it away! He should make another and enter it in a show. If he is just starting out, he could enter one in a State Fair (one here in February with LOTS of arts and crafts). OMG I can't get over how talented a metal sculpturer he is! Wonderful!!!

That is great. I wish I could work with metal. One day maybe I will get brave enough to try it.

My word! He is a very talented artist!

How cool is that? Clever boy.

Very Cool! What a creative kid!!

Now that is awesome!!!!!
Creativity runs in the family.
xo

Oh my goodnes, that is so amazing!! Nick is one talented guy!

What a fabbie thing!! so unique and perfect. Who says talent isnt related..
PEace, Kai.

WOW! It is gorgeous! What a talent!!

Wow ! Mom,you have a reason to brag.That rose is a wonderful work of art.Your son is very talented ,so keep on bragging.

This is just beautiful!!! What a totally talented guy.

And, as a teacher, I always think that their is something wrong with those parents who are not proud/boastful/positive about their kids. Keep being Mama!

Wow! How special! Hope you & your family had a wonderful holiday!!
~cheers~
Angie

I am so impressed! A metal rose, and so beautiful. You did good raising this boy, Lisa!!!! xoxo

Beautiful, Lisa - you should be proud of him! What a talented (and sweet) young man.