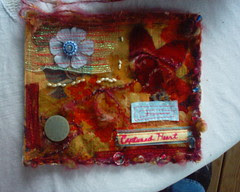 Captured Heart
Originally uploaded by GroggyFroggy.
I've been playing with this piece for the past couple of days. It isn't finished yet. I'm trimming the edges with some fun yarn. Maybe you can see it if you click on it. (that's my boot you to the right lol I'm so happy it's boot-wearing weather again) I'm also putting some beads around the edges as I sew the yarn on. I find it very soothing to just putter with the fabric. I love sewing the beads on. The little pearl ones (that look like rice) were really enjoyable.

I went to Nick's school this morning to talk with the principal. I've been trying to get her to call me for weeks. Apparently she is quite busy. Nick was enrolled in a college math course, but the first week he was so frustrated. It was almost painful for him. He said "mom, he was showing them how to get the lowest common denominator by using a pizza." Nick probably knew how to get the lcd by, oh, 2nd grade. lol if that late. So, he wants to drop the class. His teacher, who is also his physics teacher, agreed that this class was of no benefit to Nick. He doesn't want to substitute a class. He's a Senior and he has enough credits. He just wants to leave. They won't let him leave without a note from an employer because now Seniors are only supposed to leave if they have a job. But, under certain circumstances, like the parent saying , "hey, I want my kid to leave" in writing, the principal will sometimes reconsider...so that's what I did this morning, wrote a note and hopefully she will fix this all up. Otherwise, his absences (because I've been signing him out and picking him up) are going to make it look like he was skipping and he could get a failing grade..and that would really suck. So, keep your fingers crossed for us.

Tim went out to the store a couple of times yesterday. First time, he came back with a journal for me. Very pretty with leaves on the front. That's a first. The last time he came back with chocolate. yummy. We've been walking several mornings this week. It's such a pretty and peaceful place in the woods. We've both enjoyed it a lot and plan to continue. It's raining today so I don't think we're going to get to go. One of these mornings I'll remember my camera. Each morning, I've been a little less far away from the house when I remember it. lol Eventually I will remember before I shut the door. :)

Hope everyone has a great weekend.
Posted by Lisa at 8:51 AM

Love the colors in this!

I don't quite understand the American school system but I'll sure be praying that it all goes smoothly for Nick, I remember having a class in history that was just so painfully easy that I changed to music - glad I did now.

How sweet is Tim to get you those lovely little gifts. sometimes the little surprises are the nicest :o) Your walks sound lovely too.

This is lovely and understated...do you know what I really like? How you use flowers - the button on this one is wonderful...you know I will have to start imitating you!!

I hope it works out...nothing is worse than a bored smart teen...

I really like the colours on this one too! Sounds like Nick is a smart guy. I hope you're able to get all of this sorted out :)

Thanks Sarah; I appreciate it. :)

Me lol You're too funny. That button is a vintage one. My collection is dwindling. I need to go button shopping.

Amy, thanks. :) Yes, I hope we get it sorted out too. I think it will all turn out ok one way or the other.

You are a bright spot in my day!
Glad you're feeling better, and I hope you sort things out at the school. I'm on Nick's side!!

Sorry I haven't been around alot. I have been peaking in, but just hurrying so I haven't commented. I love the piece you have pictured in today's post. The colors are so warm and lovely together.

oh Lisa that is superb...playing with fabric at any time is such destresser for me. Maybe you and I should do a quiltie swap! I have 3 more to do for Daisy's Friendship Piece but I'd be happy to do more!! In fact I will anyway, it's what I love to do!!!
XOXO
and good luck, I'm with you regarding Tim! I had the same problem senior year(finished my credits needed) but couldn't leave...so for me I got to hang in the art class...to me, better than leaving!

Beautiful work going there. Good Luck with the school. Seems to me a lot of the time the schools are more interested in rules than in the children and what is best for them.

Lovely, delicate piece of art. I really like it! And your little blue cup lady is adorable.

Thank you visiting me!
I have been trying to be more proactive about posting. I tend to just read other blogs until I am so sleepy, I just want to go to bed. I also work on the computer every single day so I find it takes away my enthusiasm for anything else associated with typing...I am working on LESS work...hence the "I am lazy" post, LOL.
Your art work is delicious. Oh my, I feel the creeping of another "want to do" project and I simply have NO time for anything new! *sigh*
Please come again and yes, thanks to Peggy...I love her to pieces!
Okay, back to work....ebay calls my name like an evil task master!
p.s. My cat is just a spoiled creature...he loves TV and will often sit in that strange contorted manner as if it is normal to all felines. He is an odd one, for sure!

ive been dealing with the US school system with my daughter and all I can say is that Im glad she has graduatd and is free to create a life!!
I really hope Nick finds whatever illuminates his soul and doesn't let a few people hold back him finding his joy..
Bright blessings!!
PEace, Kai

Wow, I haven't visited here for a while, so I LOVE the rose and froggy photo on your header!!

Not sure how education works in your state, but you should be able to throw your parental weight around (nicely) and get what you want from the principal, especially since Nick has enough credits to graduate anyway.

Journals and chocolates, how lovely!

I'm baaaaack! I just had to tell you I thought of you today, when I was watering my plants out front. The hose is in one of those large terra cotta hose holders, looks like a big pot, where you curl it around, and I wanted to clean it out because it had a lot of dirt in it. So I hosed it and turned it upside down and there living in the bottom was the cutest little frog...looks just like the one in your flower except he was brown..I was very careful to put his house back in order! :)

Cindi, I know how that is! Good to see you.

Lisa, a swap sounds like fun. I had enough credits my senior year, too, and spent the last half of the day doing choir, show choir and a kind of free music period.

Ninnie, thanks! Well, in their defense, they've had a lot of trouble with kids skipping class and I guess she's just trying to get a handle on it.

Judie, thanks so much. I was so tickled to hear that you thought of me when you saw the little froggy. LOL

Nancourt, lol my cat likes to sit in that position too. It always makes me laugh.

Kai, Nick definitely walks to the beat of his own drum. He's taught me a lot about doing your own thing and not worrying what people think. (I try to take credit for being the one who taught him that, though hehe).

Hi Anne! Thanks, it's great to see you again.

Isabella in the 21st Century said...

I love the Autumn colours. I hope things go OK for Nick, I'm sure his teachers will see sense!

Captured Heart is coming out beautifully !

Beading is soooo peaceful I agree.

and it gives a chance to play with shiny things right ?

Your walks in the woods sound lovely.

I Hope you remember that camera soon.
Love, S.

Captured Heart is just beautiful. I love the textures and layers.

I am sure that things will work out for your son. I teach high school in Australia - and direct approaches to the principal seem to work here.