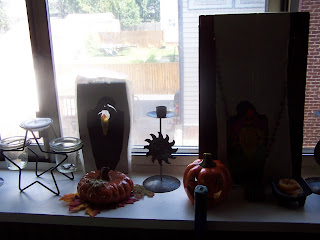 These are the little pumpkins behind the altar on the windowsill. 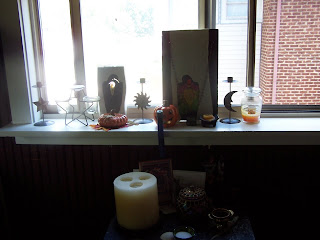 The altar and the window sill. 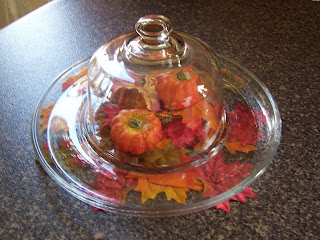 I remembered that I had a few pumpkins and silk leaves put away so I decided to dress up this cheese plate. I had the other leaves on top surrounding the dome but I know my cat will get them if I leave them out so I decided to put them under the plate and I like it even better. 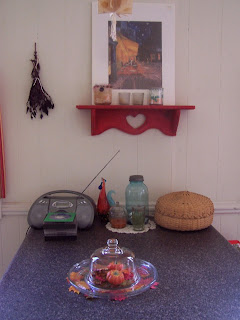 This is a little island in the kitchen.

While I was taking pictures, I heard a wonderful familiar voice. Justyn! She was once my next-door (in the same house, basically) neighbor and she's since moved but she dropped by with lots of goodies!

I'll take a pic later of the beautiful necklace she made and gave me. She also brought Kona coffee (YUM!) and some Hershey's kisses with macadamia nuts. OMG! So good. And, she brought these books for me to borrow.

She said she thought I seemed like a "kitchen witch." hehe I took that as a high compliment!! It's chock full of recipes for incense, bath salts, magickal oils and baked goods. I can't wait to try out some of the recipes. Both books look so fun.

It was so good to catch up with her. I had missed her so much. She stayed and had soup with us. I made a giant batch of soup the other night from some potatoes my step-father gave us when we were in WV. Patrick grilled a chicken and shredded it into the soup. As Justyn said, "this is the perfect fall food." We all enjoyed it and the conversation.

The rest of the day has been spent sort of puttering around, blogging, youtube-ing (and being slightly disturbed by a guy who actually believes that some men drilled into the gates of hell and heard the sounds of people wailing. He really believes it. For some reason it makes me want to cry that people out there can actually believe that. Oh, he had the audio to prove it. ugh. I can't think about that anymore because it just drives me nuts that anyone could be so ignorant in this day of information and science and then try to use it to drive people to a loving Jesus. But, you know, his source was Art Bell so, of course, it's true! grrr)

Anyway, other than the little trip to the core of the earth, otherwise known as hell, it was a beautifully sunny and fun day.

Love your mini pumpkins and leaves. I didn't know about the leaves - until I caught my cat eating them! Had to pack them away, but now that I see your clever solution, I may have to dig them out again!

lol Rue. Be sure to stick them all the way under. Zeke still managed to pull one out from under the glass!

Now that sounds like a wonderful day, Lisa! I love the Incense, Oils and Brews book! Oh and speaking of YouTube. Ugh...it's sad that amongst some great YouTubers out there, there are also those like the one you ran into today. It's very, very sad.

Hope you had a great weekend!!

I like your autumn touches! We're busy painting for spring, funny because it really only lasts a couple of weeks and very soon we'll be sweltering.

You got a Creative Blogger Award! Please visit my blog and keep the game on!

I like the cheese plate and dome and the star candle holder. The Kona coffee sounds lovely as does the soup!!

I like the fall look of your blog. And your alter looks beautiful.

Those two books look very interesting. I'll be waiting to hear if you try any of the "recipes" and how you like them.