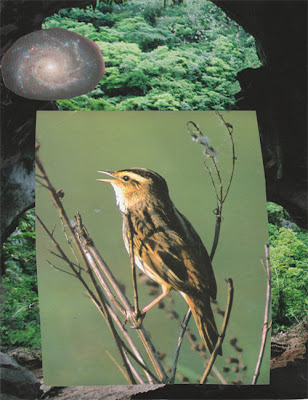 This is a SoulCollage® Card that I haven't shown. He makes me happy today.
It's been an interesting morning. Yesterday, I read this story about a brilliant young man who took his life. He had been sexually abused as a child and though he was successful in both career and friendship, he could never escape what he called "the darkness" of being abused.
Reading his 2000 word obituary was excruciating yet enlightening.
It renewed my commitment to SoulCollage and to sharing it with others. I made a comment on my facebook about it this morning and a friend happens to be very good friends with the executive director Mental Health America here in the Roanoke office. She called her about SoulCollage and then let me know that there is interest and gave me the number to call. I'm waiting for a call back. Very exciting. And scary. But I'm ignoring scary. No, that's not true. I'm not ignoring it. I'm acknowledging it and maybe even embracing it a bit, knowing that it can't stop me unless I allow it to. It's ok to be afraid of new things...even if you know you're prepared.
I just feel that if kids are allowed to express themselves and to realize that these darknesses are just one facet of their whole beautiful selves, they will grow up healthier and happier.
I want to be a part of helping as many folks, children and adults, on their roads to recovery as I can.
Posted by Lisa at 1:31 PM

even if you just helped one person ( and I know you will probably help many more) but just making the diff in one persons life is enough. Go do it and like you I would be scared too, but think of the good you will be doing with this GO you Lisa!!!

Hi Lisa,
I love your SoulCollage card. Many of us have been through soul-wrenching experiences - but there is light beyond, between and around the dark areas of life. So much of modern life and even many spiritual teachings focus on 'the Light' - but this can often lead to an over-emphasis on and demonising of 'the Dark' - which cannot simply be 'cancelled, cleared and deleted' - but which we can learn to see as just one part of us, as you say.
Your intention to teach about The Balance will no doubt make a difference to the souls you touch. Good luck with the new opportunity! Remember, the Goddess (or whatever form of Divinity you feel comfortable with) wouldn't give you anything you couldn't handle beautifully, uniquely and gorgeously!
Blessings,
a Creative Gypsy

I have seen your artwork posted here on blogspot. I liked it. I follow your blog regularly. I hope you would like to look at my articles about paintings.
Mughal Miniatures
Paintings of Mistresses: Fetching Millions

Embracing the scary...that's the tough one. I love your knowledge of "it can't hurt me unless I allow it to." Those are words I need to remember.
I hope that this opportunity comes through for you. You're already helping people recover through your blog and your current/past classes, but the opportunity to help more would be wonderful.
Thanks, Brandy

Art From The heart said...

I love following your blog. Your art,words and kindness inspire me.
Hug, Amy