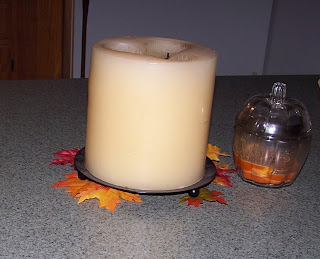 I've been doing a little Fall decorating. Just a few touches here and there. 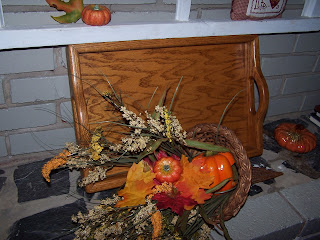 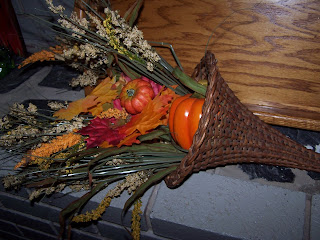 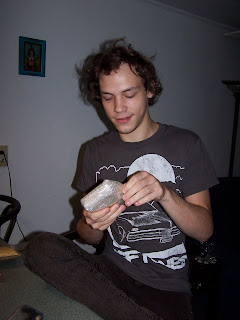 This was Mike on the actual day of his birthday. 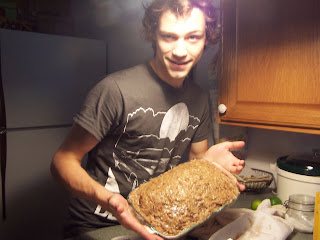 He slept in and woke up to a birthday cake so he had sausage and cake for breakfast. ha
It's been a long time since I've posted. It's been an emotional few weeks.
Patrick lost his sister, who was really more like a mom and he has been pretty distraught. It was so sudden and unexpected. I wish I could take away his pain. He just keeps pushing through and working but sometimes it all just becomes too much.
There were lots of little stressers last week, on top of the sadness about Patrick's sister, Beverly.
And then, one morning last week, Mike kept kind of hovering and I knew he was needing to tell me something. I thought he was just trying to think of a way to ask me (again) to take him to see his girlfriend.
After about 20 or 30 minutes, he finally told me that he's going to be daddy! I'm going to be a Grandma! He and his girlfriend are planning to get married. I always suspected they would end up getting married. I've never seen him like this with anyone.
I know they're young and it won't necessarily be easy but they are both completely focused on the health of the baby and finding a way to take care of it responsibly.
I know they'll be ok.
Did I mention...I'm going to be a Grandma!
So, that's been my past couple of weeks. Very emotional.
But we're ok.
♥
Posted by Lisa at 5:13 PM

:) *GRINS* Ohh congratulations Lisa!!! *Hop for joy* Yayyy!!! :)
Ohh and no worries at all about not posting. Look at MY blog! I haven't been able to post in FOREVER! I'll get back to that and hopfully soon! Thanks for the smile and did I say congratulations?! Well.... Congratulations Grandma Lisa! :)
*HUGS*

So many news. I love Fall decoratings!
I am really sorry for your loss.
Congragulations for the new arrival! You must be so excited!

LOve that you are starting to decorate for fall. Congrats on a grandbaby. I know he will be a great daddy and you will have the time of your life being Grandma. I so feel for Patrick. I am thinking of him every day. Love Hugs and Blessings to you all

I've been missing you! But now that you post this one, I can understand why. Wow... Losing one family member and gaining another in such a short period of time. It doesn't seem right to say congratulations and regrets in the same sentence.... so just :)

I'm so sorry for the loss of Patrick's sister, but can't help but be overjoyed that there will be a new little life joining your family!

This will be the only time in my life I'm sure, that I will offer condolences and congratulations in the same sentence.

Well, that's life for you... One soul leaves unexpectedly to make room for a brand new soul.
Hugs,
Sophie

miss koolaid took the words right out of my mouth, so congratulations on the being a grandma! how lovely is that?

Wow! That is a wide variety of stuff to fit in such a short post.

I hope that Patrick finds a way to grieve and move on.

Sending hugs to you all! So sorry for the loss in your family, and congrats to you on becoming a grandma! Good wishes to your son and his girlfriend, they sound so grown-up and responsible.

So sorry to hear about Patricks
sister. Lifting up Prayers!!!

Congratulations Grandma to Be!

Thank you all so much for your condolences and congratulations. I can't tell you how much it means to us.

HOLy cow..you have had a week! OMG! Granny Lisa..you are going t obe anawesome Granny~! Please tell Patrick My heart is with him...I knew about his sister on Fb... Love you guys..maybe you need a vacation t othe beach...hint hint

I am sooooo behind on my fall decoration, but I'll use a full day this weekend to go in the woods and search for leafs and other things to decorate my autumn altar. Your decor looks precious!

Congrats to you and your son! I had my first child at 18. I'm staying home while my bf studies (I'm 21 now and we have another one!) You big guy won't ever regret having his kid sooner than most. Healthy baby, healthy parents :)

I am so sorry to hear of Patrick's loss....sending you both lots of love and hugs.