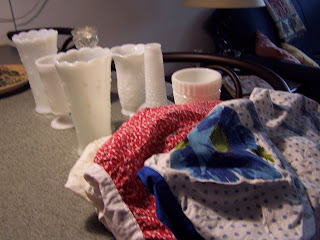 We had a great weekend. Friday night, we went to see my son, Mike, play with his band Epicurus. It was really wonderful to watch Mike play drums. I can't even explain the intensity in his face when he's playing. It's his favorite thing in the world to be doing. I took pics but it was pretty dark in there (and that was before they turned the lights out) so they're blurry. After the concert, we went to one of our favorite pubs and listened to Nikki Talley. We really enjoyed that, too and bought a cd.
The rest of the weekend, I didn't even get dressed! I lounged around, blogged and cut some quilt squares and crocheted some grannies for an afghan. Perfect weekend, if you ask me.
Today, I spent 4 1/2 hours at the storage unit. It's a long story about the storage unit but some of the things have been in there for ten years! Ten! I threw away two city garbage cans full today and brought some things home and bagged some things up for GoodWill and I still have hours of stuff to go through.
It was fun, though. I found some things that I thought were lost to me forever. Things I had just seen pics of in my old photobucket and wished I had. The last box I went through was full of milk glass and aprons! Heaven. It was like going to a thrift store or church yard sale but it cost me nothing.
There are a couple of larger pieces that I forgot to photograph. They're in the sink waiting to be washed.
I found some more yarn, too, which meant I didn't have to stop at ACMoore on the way home. I needed more yarn for my grannies and I found the perfect gray that was just what I needed.
I'll show some pics of the squares in a day or so and of the larger pieces of milk glass and another piece that's green. Not sure what it is but I think it will be nice for planting a jade in. One less thing I have to buy now. Yay!
Oooh I also found my Warren Kimble prints I'd been wishing for. I bought them when I worked for Avon. So happy to have found them. I guess Tim put them all in a box and put them there and I didn't even know it. I left so much behind because I didn't want him to come home to bare walls. I was starting to regret that decision because there's so much stuff I never went back to get. I'm really grateful that he boxed that stuff up. I'm still missing stuff but hey, Warren Kimble, Aprons and Milk Glass? I'm happy!
Have a great week everyone!
Posted by Lisa at 6:49 PM

Sounds like you had a fantastic weekend! I love the weekends I can stay in my pajamas. Stuff that has been in storage for ten years? Oh, I bet there are some real treasures to be found! Always like finding the things that I think I will have to buy. Wishing you a creative week!

That DOES sound like the perfect weekend! lol (especially the pajamas part!)

How fun to find all those goodies, and get your storage cleaned up a bit too (which is always a challenge!)

I love it when I find forgotten things too. There are also a lot of things that I haven't forgotten about and wish I could find! LOL

That DOES sound like a fantastic weekend! I took one look at photo and went "OOOHHHH!!!" with giddy delight! :)

Sounds lovely! You must have been so proud watching your son play. I get quite teary at things like that. Thanks for the Blogger tip, I'm still struggling with it, I do hope they change it back! :) xx