It was a really nice weekend for bumming around and rearranging things. I grubbied up an electric candle that I bought for .25cents somewhere last year or the year before and put it in this basket with some ornaments. I have some old keys that belong to Patrick so I put this little bit of ribbon through them and tied them on. Why? I don't know. They were just there so I grabbed them. 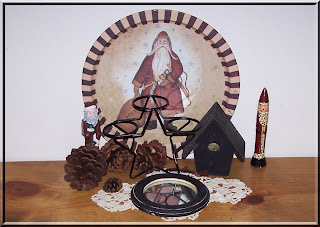 This is on the table in the bathroom. This has been a favorite tray of mine for years. I painted the Santa on the left years and years ago. Over the years he's been broken several times. I just keep gluing his head back on. The Santa on the right was a gift many moons ago. 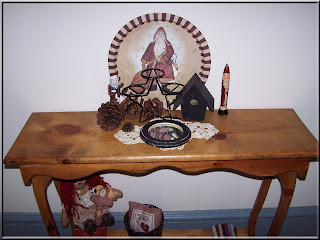 I put this little arrangement together for the corner of the sink. I had this black box full of little craft pieces of this and that. I emptied it and put a doily in it and added the angel and a bunch of sage that I dried from our garden. I just tied some homespun around it and I think it's Christmasy enough. 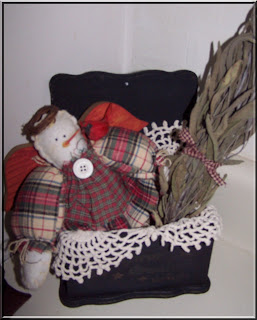 Below is the printing press that my son, Nick, made for us last year for Christmas. He thought I could use it in my collages and for making cards and also, Patrick's family owned a printing business in Texas and he has a great love for printing presses. So it was the perfect combo gift. I figure it looks so awesome, why not decorate with it when I'm not using it, right? The soldiers were a gift from my uncle on Nick's first birthday. He made one for Nick's dad, me and Nick. I blacked out his dad's name (sorry Tom, lol, I know you understand) and added Michael's name. Then I decided not to use the one with my name so there are only two. I really like them this year even more than I have in the past. (The names are on the heart base. I didn't think to get a pic of that.) 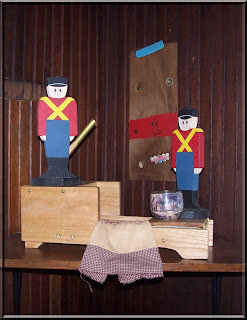 I switched out the little green table and put it in the bedroom and brought this one out, traded out lamps too. I put this little brassy lamp (I'm going to spray paint it black eventually) into a little basket and filled the basket with pine cones and stuff. I will probably prim up the shade with some homespun one of these days. I really like this table there so much better. I rescued it from my neighbor's trash can. Literally! I saw it in the alley with the legs sticking out. I was really shocked to see it had two tiers. 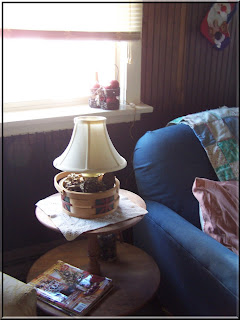 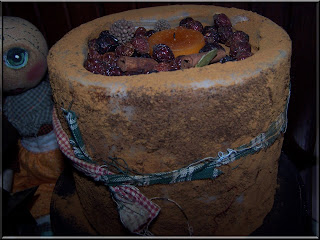 And this is my fave thing in a while. I am proud of this! :)

This was an old white 3 wick candle that I bought years ago at a yard sale. I never did like it. It wasn't even off-white. It was stark white and does not smell good when burning. Too perfumey. (but it was dirt cheap) So I found some tutorials online and decided to grubby it up. I started it a few weeks ago and lived with it a while but it wasn't quite right. So this weekend, I added some more mod podge (until I ran out!) and lots more cinnamon and tied some homespun around it. Char at the Pickled Pepper Patch has a great tutorial for these (and a ton of other amazing things.) She actually drills a hole for placing the little battery flicker lights in them so you can enjoy them all the time without burning them. I don't have any flicker lights yet but I had burned the candle and it had a pretty good sized well in it so I just put a tealight in it and filled in around it with fixins. I absolutely love it. 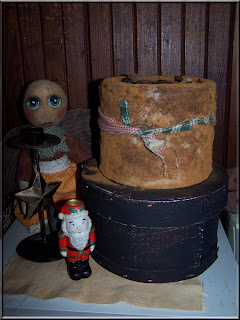 As you can see, it wasn't quite dry when I put it there. Some of the cinnamon came off. lol I was too anxious to see it on top of the cheesebox I painted black. I need to find something else to put my sewing stuff in now. I dumped it all out to use it. oops.

I also made some applesauce and cinnamon ornaments. I have no cookie cutters (I know, crazy!) so I tried just cutting out a gingerbread freehand. hahahah Not a shining moment. I put some into snowman candy molds and they actually turned out well. I think I'll make more of those. The rest I just made like gingersnaps and they look really cute in my holly leaf sled. I'll get pics of that later and show you. They smell so good.

I'm taking full advantage of the fact that the company doesn't want us mailing out campaigns today while they test run a new email system. Some of the above tweaking I did this morning. I've also been reading blogs and listening to prim radio shows. Ahhhh, an extra weekend morning, really. And now I even got to make a nice, too-wordy post. hehe

Have a great week everyone!

Really like the key's attached
to the basket with electric light
and ornaments!!

That snowman angel is so cute!!

Candle idea is great. I've had
some that I didn't like the scent
of either.

God Bless You and Yours and a
have a Very Merry Christmas and
a Blessed New Year Too!!!

What fabulous, gorgeous work!! I love it!! :) I can only imagine how wonderful your home must be this season! :)

Flassie, thank you and you have a very merry Christmas, too!

Carrie, thanks so much! Now that I've decorated, I need to actually clean. lol

Girl , everything looks so cute! I got a kick out of your teying to cut ginger bread men !

WOW! My tweaking has never looked this good, everything looks amazing. LOL at the cheese box. Oh, I really like the eyes of your last little guy, I wonder what's on his mind?

I just love all your decorations! They are so country and lovely and home-y!

Hi Lisa! Want to take the time and get around to paying you a visit and catch up with your blog. I really love all those little details you put into your decorating - it pays off and everything looks great! I especially love the keys tied to the basket and I'll have to try the grubby candle idea as yours turned out fab!
Thanks for your comments on my blog - really love hearing from you!
Have a great week,
Christine

) I can only imagine how wonderful your home must be this season! :)

I have that same Santa tray. Hubby uses it every Christmas to take his homemade fudge to the office Christmas party. Otherwise Santa hides in the kitchen cupboard all year... poor Santa... LOL