How did the rose ever open its heart and give to this world all of its beauty? It felt the encouragement of Light against its being; otherwise we all remain too frightened. -Hafiz

I just received this beautiful little saying in my email. I subscribe to "Word for the Day" from Gratefulness.org. Every day I receive a message similar to this one. It's a nice way to start my day and today I feel like sharing.

I went to sleep right after the ballgame last night so I was wide awake by 4am, unable to sleep. So I have been up reading this blog. She has a lot of great ideas. I think it would be great to have a big garden and be more self-sustaining.

I think that we live a pretty simple life. We enjoy the little things in life and don't get caught up in commercialism. But it's not like it's an effort or anything. That stuff just doesn't appeal to us. We both get a kick out of buying second hand. I drive a car that belonged to my grandparents. They bought it in 1993. After they were both gone, it was passed on to my mother. She drove it for several years. When she got a new car a couple of years back, she gave the old one to me. It suits me just fine. If it weren't for going to the gym and taking Mike to school, it would probably never leave the driveway anyway. As it is, I drive probably 2 to 3 miles altogether on the days I do go out. One of these days I'll get a bike. I can definitely bike to the gym. Or maybe if I get a bike, I won't need a gym. lol

Oh, I did go out today. I didn't go to the gym all last week. I hurt my back picking up some bricks and cleaning around in the yard so I took last week off. I finally went today so I ran all my other errands (bank, post office, returning movies) and I took a little side trip to Goodwill. I've just been itching to go. 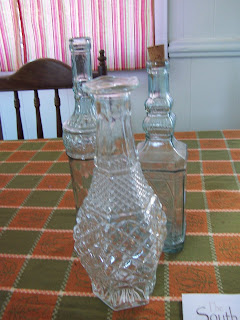 I picked up three cool looking bottles for a buck a piece. I've been wanting one for dishwashing liquid. The other two are bonus and will probably just sit around looking pretty.

I also got 4 picture frames for 50cents a piece. They had more frames and I should have just scooped them all up.I didn't take pictures of the frames but they're just your standard frames. All the same and made of wood. I'll paint them and use them for stitchy stuff. 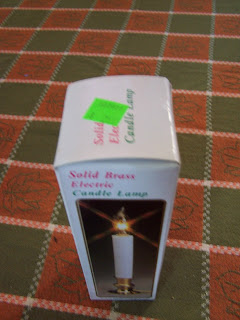 I got this cute little electric candle, too, for 25cents. It works great, though it gets pretty hot. I wouldn't leave it on and leave the apartment. I was hoping to put it in an arrangement but I'm afraid it might catch it on fire, so it's destined to just sit in the window. For a quarter, I can live with that.

I've been a regular runaround this week. Yesterday I went to a place called "Buy the Season" and walked around. It's a collection of vendor booths, with primitive, shabby chic, and vintage type stuff. It's just within a couple miles of my house and I had never been there. I really enjoyed it. I bought some "fixin's" which is just dried smell-good stuff; potpourri. They were $1.50 for a good sized scoop. I got two scoops. Then I bought a Country Sampler magazine at the checkout and that's it. I got tons of ideas, but they were free.

I realized today (again) that I just can't do all-out prim. I don't think I can do all-out anything. I'm too fickle. I get bored or feel overwhelmed. I like the option of change. So I think I'll just have a few touches of the primitive things I enjoy but not go overboard. Don't get me wrong, I LOVE it when people go overboard with prim. lol I love to look at their pictures and I really, really enjoy the way it looks. But I feel the same way about people who do shabby chic and funky and, you name it! So, I'm not going to worry about labeling what I like or trying to like all of one thing. I'll just have a little funky here, a little shabby there and some prim sprinkled in and just not worry about it. I'm sure you were just on pins and needles wondering what I was going to do.

This is what happens when I can't sleep. You guys get to hear all the stuff that's keeping me awake.

By the way, Judie, I was thinking of you all throughout the game. lol After I finished whooping and hollering, I said, "sorry Judie."

Alright, well, goodnight or goodmorning. It's just about the time I normally get up now. When Mike's here and I have to get him up for school, I have to drag myself out of bed. But when he's at his dad's and I don't have to get up early, my eyes always fly open early. Weirdness.

Well, I had published and was just checking out how it looked when I saw a picture at the top that I totally forgot to say anything about. lol It's the one below now. This is a picture of beer bread that our neighbor made. It is really yummy. They just came by Sunday with this bread straight from the oven, almost too hot to even hold. We've really enjoyed it this week. I made eggplant lasagne yesterday and the bread was so good with it. Thanks Justyn! 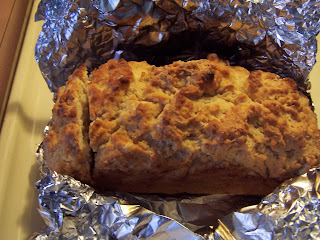 Hi Lisa,
Great bottles...I have one very similar to the one in the front. Great price, too!

I know what you mean about decorating...I don't think I have one set style...I like a little bit of this style and that style. It's just who I am...it makes me, me!

Have a good day!

Wow, you have a lot of energy at 4AM :-). I am glad you are having so much fun :-).
Almost everything I own is second hand, but I must confess I would like to buy a new piece of furniture someday...