A couple of weeks ago, I found a recipe (just google homemade laundry detergent) for making my own laundry detergent. Mine is 20 Mule Team Borax, Arm&Hammer washing soda and ivory soap. I love it. It smells clean and is so cheap. Two tablespoons for a large load is all it takes.

We got this jar (full of buttons) at the flea market last spring. I emptied the buttons into a smaller jar and put the detergent in it. This morning I found some awesome labels at Tipnut. You can enter your own text where I put "laundry detergent" and then print them out. I just mod podged this onto the jar. Simple. Clean. I love it! 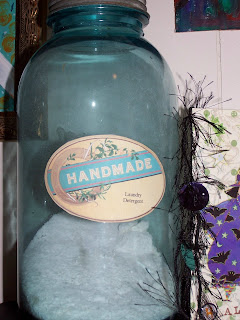 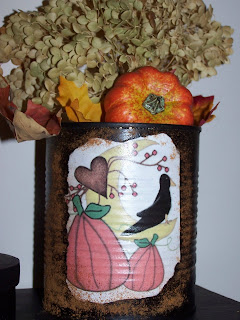 The idea for doing this can came from the Pickled Pepper Patch. She used a jar and made a luminary and I plan to try that, too. But in this case, I used a can. One portion of last night's supper came from this can. When I did the supper dishes, I washed it and took the label off. (Good collard greens...from a can! I know!) Then I gave it a couple of coats of black paint and let it sit overnight. This morning I remembered this cute little graphic (from GoneCountryGraphics. it's also on my sidebar) and mod podged it on. Then I put a coat of mod podge over it to protect it and added a little cinnamon around the edges. I took it outside and sprayed some sealant over it so the cinnamon wouldn't keep falling off. I brought it in and sat it on my newly painted black shelf, went around the house finding stuff to put in it (lol). I didn't have a lot of stuff so I filled the can with little bits of batting I had in a basket so I could just lay the leaves and pumpkin on top. I found a couple of glitter sister halloween cards from years past...they make me smile so much! Altogether, I think it's a nice little autumny change. 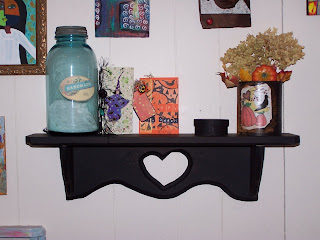 Yes, that is the shelf that was green with a checkered border and folk painting. I got tired of it. :)
My Grandpa made this shelf many, many years ago. I think he would like this.

Well, the bacon's frying and more stuff is begging to be painted, sewn and glued. See ya tomorrow (after all my SuddenValues work is done, of course!) xoxoxoxoxoxox
Posted by Lisa at 9:30 AM

The shelf looks good in black. Gives it a completely new personality! I like what you did with the can. Very fun. And good for you for making your own laundry detergent! I still have to do my laundry elsewhere (my parents' house) and don't really have anywhere to make or store my own detergent but one day...

Oh my gosh!!! I love it!! I am definitely going to do that. Thanks for the great idea! Laundry detergent is ridiculously priced.

Sophie, thanks! It is a good day when you can do your laundry without leaving the house. But it's good you can do it at your parents!

Knit Witch! You are so welcome. I actually got the idea from Ravelry. lol

Hi Lisa, Thank you for stopping by and saying hello. We have a lot in common and I have enjoyed my visit to your blog as well. I have listed you on my blog roll for easier and quicker visitinf. I think you and I will become fast friends.
I have been making my own laundry soap all summer also. I use the same recipe as you only I use Fell Naptha instead of Ivory. It gives it a really deep industrious lemon smell. I think it works really well, even on dirty farm clothes.
Here's to hot older men and new friendships,
Shanda

Love your black shelf, Lisa, and the old jar with laundry detergent...looks good!

What a treasure your blog is. Always enjoy coming here. But.....Phillies????? Um, I live in Tampa Bay. ;) Unfortunately, I may have to hang my head soon. But at least I have superbowl to look forward to.

Hi Shanda, the recipe I used called for that soap, too, but I couldn't find any. I'm glad we tripped over each other. :)

Judie, ooops! LOL Sorry about that. Just hold your head up high. They've played really well even if we beat the pants off them. hehe Yay for the superbowl!