I've been busy nesting. September always does that to me. I've been working on some pillows for the bedroom. I recently bought new sheets, pillowcases and curtains and I really like the way the brown works with the comforter that Patrick bought as a surprise for me last year. 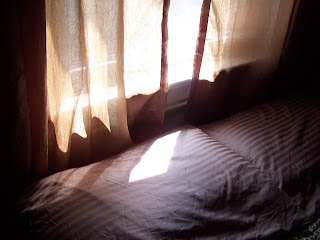 I also crocheted a little "necklace" for a vase I have. I used 28-gauge wire and some metal and glass seed beads. 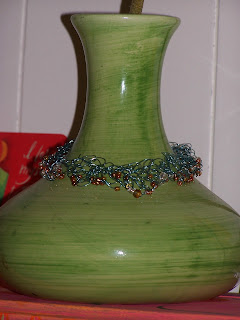 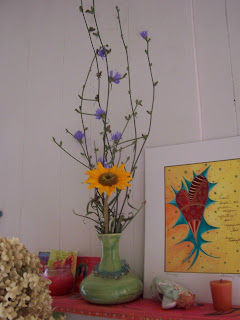 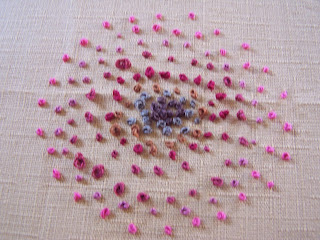 I found this great tutorial at the Purl Bee. Isn't she just amazing? I just love doing french knots since I finally can, thanks to this video. I love the way the pillows look. There's a whole flickr group dedicated to them. I will probably switch fabrics because I'm not sure I want this gold on the bed but I couldn't wait to try it out. It's good that I practiced because some of my knots are sort of out of control. I'll get some brown fabric and then use this same color combination. It really works with the comforter.

I also made some dishcloths for my friend Mary. I crocheted them in simple double and half-double stitches. I really love the natural colors. I used sugar n cream cotton yarn. So soft. I've been making dishcloths for myself out of some yarn that actually says it's dishcloth yarn. I got it three or so years ago in a huge bag of yarn I bought (for a dollar!) at a church sale so I'm trying to use it up. But the sugar n cream is so much softer and I think it washes up better, too. The other yarn tends to fade. 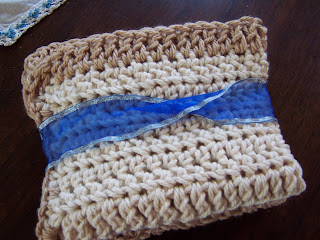 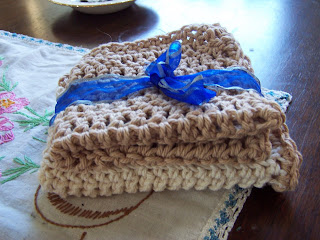 If you get a chance, check out my son Nick's new website and business. I'm so proud of him. The pic on his site is of him in his dad's workshop. You can tell that it just suits him.
He's also been working really hard with his band. They've made demo cds and they sound so great. They're doing everything themselves from mixing the cds to creating the labels and everything. They've been playing downtown Roanoke and making some money. They've even had a few paid requests to serenade couples at outdoor restaurants.

My younger son Mike turned 16 on Monday. I can hardly believe that my BABY is 16! I took pictures but they turned out dark because it was pretty late by the time we showed him the cake. The camera caught it just as the candles went out. You can still see him puckering up, though, blowing them out. lol 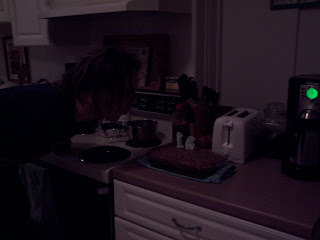 I think that's about it for now. I bought fabric yesterday to make curtains for the kitchen. I bought some new rugs and a tablecloth, too. I got a small candle to match and then Patrick came home with a really awesome sprig of pip berries with little gold "thingies" on it. It was as if he had been with me to see the colors I was choosing because it was the perfect final touch for the table. So, hopefully I'll be sewing up curtains this week and I'll take pictures when they're up.

Have a great week everyone. Thank you for all the wonderful comments. They mean so much to me. xoxoxoxoxoxo
Posted by Lisa at 1:33 PM

You always put me to shame by all the things you do! I love the little necklace you made for the vase....great idea. And all the French knots are pretty.

Have fun making your new curtains.

my you are busy! I really like the blog look these days. It looks so nice and spacious for some reason. Is there room for me to come by for tea?? :)

You have been a busy bee, everything is so lovely :-).
Your son Mike is a doll and I tried
to go to Nick's site, but I had trouble, so I gave up, but I am sure he is darling too. Happy weekend.

Janet, when the temperature dips it always makes me want to make something. I've realized that I am about a yard short on fabric. That's what happens when you're a fly by the seat of your pants, heaven forbid I ever measure or use a pattern kind of gal. lol

Heather, always there is room for us to have a cup of tea together! :)

Annie, thank you so much. Nick's site is a myspace so maybe they were having a hiccup yesterday or something. Maybe I'll copy some of his pictures and put them on my blog, just in case. He's making cigar box guitars and they're really cool. Thanks for trying to look!

Thanks for the nice comments on my blog..we are not to0 far away, I'm over in F'burg!
I love your figs, and the purl bee project (aren't they great?) is fun. I'd like to give that one a try too.

Aloha Lisa and Pat,
Every time I come here, it "feels" happy and serene..A testament to your soul spirit coming out in blog land :)
Peace, Kai xx

It is so much fun to read about the fun things happening in your life and see your pics. What a shock to learn you have "old" kids. You don't look like it at all.

I like french knots too, but after my first perfect one (beginners you know) they quickly degraded. Lol. But I will keep making them until my skill increases again.

The vase necklace is very cool. And what a clever way to add a little something special to an everyday object.

Love the new feel of the blog with the soft banner.

I like putting jewerly on objects. I don't wear jewerly though.

I know how to do the french knot
but there are some other sticthes I want to learn.

I also want to learn how to darn socks. I might have to look that up on utube.

I am sewing my studio/bd curtains.
I am kind of making them like some store bought ones in my dd room.

Happy Belated To your Son Mike!!!

I go check it out after I post this. Don't want to lose what I wrote.

I was listening to a child sing
today and thought of you. Because not everyone makes my eyes tear up when they sing. Only the best!

GOD Bless You and Yours!!!

Awesome guaitars! I heard someone play one of these on OPB and loved the sound.

My step Dad played a lot of different instraments that were homemade. I loved listening to him play the saw and of course the piano. He had three piano's.

My Dad played the guitar, banjo and the harmonica. He was called a one man band.

I think I'd like to learn how to play the banjo.

Thanks everyone! Much love back to all of you.