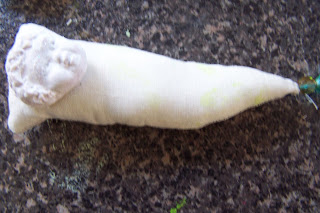 This is a WIP. Actually, it's finished and hanging on the wall already now. I couldn't leave it alone so after I snapped the picture, I finished it. I think it's really one of my favorites but I say that after I finish every doll. 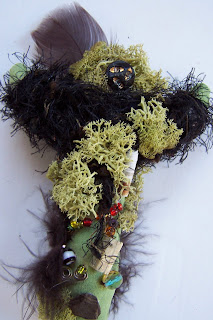 This one was so much fun to do. I had been wanting to use some natural things like moss so we got some the other day and I immediately started a doll. I had fun just adding stuff I found hanging out in little containers where I'd been saving them for a long time. 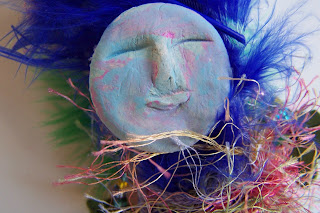 I made this face without a mold and I think she's really sweet looking, if not a little silly. hehe 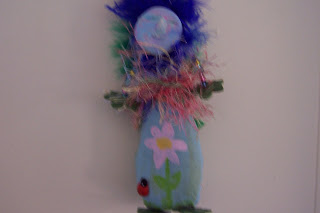 She's muslin. I stuffed her and painted her. It's really hard to bead after you paint the body. lol So she has a ladybug that's been glued on. The leafy hands and feet are sewn on, though. Her leafy hands have beaded arms. She has some feathers on her and a little bee in her "bonnet." 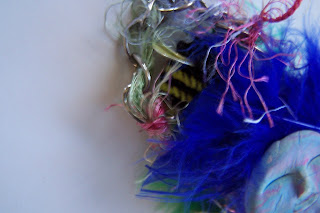 Can you tell that I'm ready for Spring??

This is a series of Aquarium looking pieces Patrick did on the, ahem, "reclaimed cedar shingles."

This one, he thought looked like a little bluebird. The heart shape was already in the wood so he just painted it in with some red paint. I just love this one. 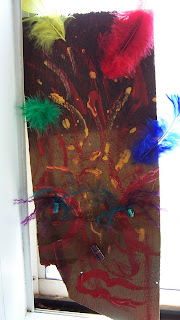 AND I adore the Mardi Gras mask!

Reclaimed cedar shakes...doesn't that sound better than shingle art? lol I read that somewhere and realized that's what we're using and it just sounds so much more artsy and environmentally friendly than "shingles off the neighbor's house".

Patrick is completely absorbed by them. I love watching him work on them. He has taken over the rest of the kitchen so now it really is just a studio with a sink and stove and fridge. It's really fun to play together; often sitting quietly, working on our own things without saying a word.

I've become obsessed with making dolls. I haven't put anything new in my art journal, except leftover paint just to keep from wasting it. I haven't been painting anything except doll bodies and faces. I haven't collaged or anything. I was planning to make a SoulCollage card tonight but I just didn't get around to it. I think I'll take some time to do that tomorrow as well as play in my journal a bit.

Something about the dolls just pulls me in.

It's almost 3am and I can't sleep. It's really unusual for me these days. I decided to make use of the time by blogging.

Take care everyone. I hope you all have a wonderful Tuesday.
Posted by Lisa at 2:44 AM

Your art dolls are great. You did a very nice job on the sculpting the face without using a mold.

Your dolls are just so much fun to look at....they always bring a smile to my face. I can tell you enjoy making them. And the "reclaimed cedar shakes" are wonderful! How nice that you and Patrick can share the "studio" and create art.

Aloha Lisa,
The dolls are super gorgeous! your talent is so amazing,
Peace, Kai xx

I love the nature doll. I'm sure whoever eventually owns it will get to feel a great connection with nature, with Mother Nature.

The shingle art is very fun. I love the mask! So colourful, so vibrant!

All so very inspiring...
*hugs*
Sophie

Your dolls are lovely Lisa......i laughed when i read about the bee in her bonnet...too cute......love the blue feathers and the adorable, sweet face!

THe dolls are awesome! You are inspiring more and more. I am thinking of making a doll for the OWOH giveaway! How are ya????