It finally warmed up enough to put the laptop back in the office so I could get some pics transferred. The first photos are of the wonderful canvas and gifts I received from Miss Sophie! The picture doesn't do it justice. I love it. I should have taken a closeup of it but you can see one at her blog. I wanted a pic of it on the wall in my studio with all the other art. I just love it. 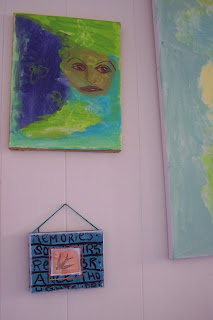 She sent me this cute paper spool collage, too, which I adore and also a beautifully handmade card. It was like Christmas all over again! 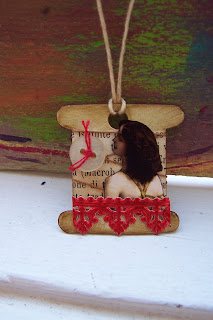 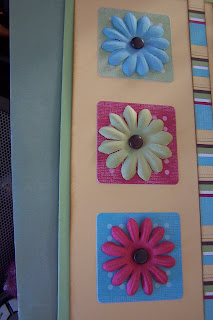 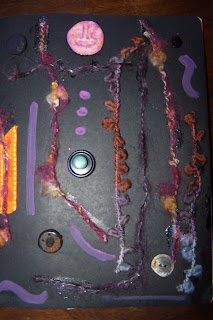 This is one of my moleskines. I decided to put fibers on the cover. It also has a paper clay face that I made without a mold. I won an apron from Ricë Freeman-Zachery and she sent some things wrapped with ribbon. A piece of that orange ribbon is on there. There are buttons, too, and I painted on it. Fun. 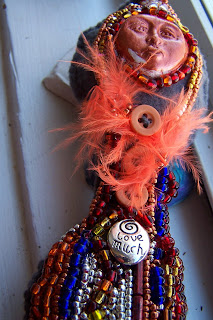 The next images are of a doll I worked on forever. I'm not at all happy with it. I like the way it looks but I made it too narrow at the waist and it isn't as sturdy as I'd like it to be. I filled it with yarn which didn't hold up as batten would have. In the last picture I've added some fibers and feathers and touched up the face. 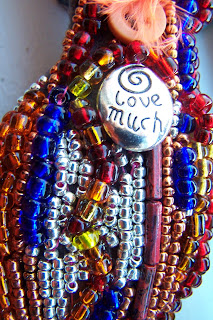 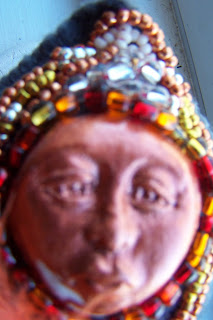 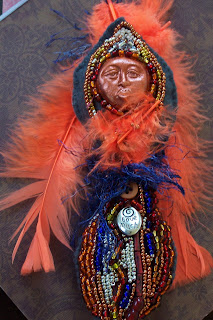 Later I'll have pics of my newest doll. I just put the finishing touches on her.

We got my sewing machine out of storage a couple of weekends ago. I couldn't get it to sew correctly for a while and then I didn't feel well, but I finally played with it some more and got it working. I took the needle out, turned it around and put it back in and it magically started sewing. Hooray! I sewed all evening after I fixed it.

I really want to make some little quilties. It's been such a long time!

I'm trying real hard to be productive. I published an article here.
It's kind of a silly little article about Farrah hair coming back. lol People really like to read about hair. Go figure.

My SoulCollage workshop was supposed to be this weekend, but unless everyone is waiting until the last minute, it isn't going to happen. I was warned that the first one might be this way. It takes time to build up business.

We're going to spend the weekend getting things ready for festivals. We have to get a tent, tables, display racks, licenses, pictures....there's so much to do, not to mention making enough stuff to sell! It's going to be a fun spring and summer.

Oh, and it's been a week since I've had a cigarette! Yay me! And Patrick, too. We both quit. It's such a relief.

Lisa...
WOW! What a busy girl with a big agenda...YOU GO! Love the spirit doll...I will post one that I have been working on for a swap later this week...CONGRATS to you and Patrick on the smoking...Any suggestions for that????? What is keeping you focused?
Keep up all the amazingly creative work...I see you on Rice's site all the time!!

Aloha Lisa,
so you have 35 hour days or what?
I can just feel the energy oozing from you as the start of a new year, a new tommorrow and a new start for your lungs and health..
I'm very happy that you and patrick are doing so well and keeping busy in light, love and creation..
Peace, kai