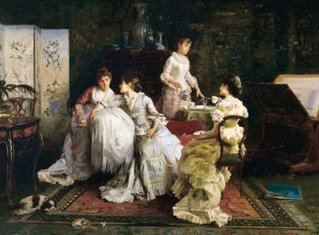 Thanks for all your kind comments. Amy, your dream about your Opa brought tears to my eyes.

I've made a couple of things over the past week but haven't taken any pictures. I tell ya, it seems like you turn around and it's dark already. As determined as I was to keep things simple this year, I seem to be doing alot of running right now. None of it has anything to do with shopping, though! I have bought one thing. One! Oh well, I mainly have to get stocking stuffers because I'm giving the boys money this year. Oh yeah, I need to make stockings. I pulled theirs out of the box and they just didn't look so good and I said "I think I need to make you guys new stockings." Nick said, "Oh no, poor you, having to sew and make new stockings..how awful for you." Would you say he was teasing me? lol

I've had a lot of last minute stuff pop up. Last Wednesday night I was asked if I could sing Sunday night at "The Journey to Bethlehem" and I did. I enjoyed it and I'm glad I did it. Yesterday I had a woman's circle (Presbyterian Women) meeting that began at 9am and ended with lunch. I got home after 1pm. I thoroughly enjoyed it, though. Some of those ladies have so many wonderful stories to tell. Some were telling Christmas memories from 80 or more years ago.

I just had this thought about the women's group. When I first came to the church 20 years ago, there were certain women who did just about everything that got done. You know how that is. There are always people who can be relied on to get things done within the church or wherever larger groups gather. These ladies were all in their 40s and 50s then, as I am now. It just dawned on me that it's still these same women who are doing everything. Younger women are working or just not interested. They did start a group for some of the younger women that will meet during the Sunday School hour once a month and I think that's great, but I do think something is missed by not rubbing elbows with these wonderful women with so many amazing stories to tell.

I regret that I spent so much time away. But I fully appreciated the fact that I had come full circle in a way, as I was being installed as an officer yesterday. It was while I was moderator of this group that I began to turn away from God and from the church. That was almost 10 years ago (unbelievable) and it felt good to officially become a part of this particular group again.

I am rambling. I interrupted myself. I was trying to make the point that there is no group of younger women standing in the ready to carry on the work of Presbyterian Women in our church. There are plenty of younger women working in the church, mostly with youth-related activities. That is entirely appropriate and I'm not criticizing. It's just that there will always be parents for youth-related activities. It works out that way, conveniently enough. But where is the drive for younger women to come once a month in the middle of the week, just because? It really is a throw-back group, in a way, I suppose. Each circle, as the groups are called, has a few more than 10 ladies. They each have an organization (like womens's shelters,etc) that they help every month. Did you know that people still roll bandages? I kind of enjoy that one. They take care of business, collect the things they need for their organization, take up a small offering for other things that may come up and then have Bible Study with an appointed teacher. When this meeting is finished, there is a general meeting with hymns, devotional and some sort of program. Sometimes it is a speaker and sometimes music. Once we even learned all about vintage linens and how to take care of them from a very interesting lady who collected such linens. She rode in on a Harley. I can enjoy a dichotomy. :) After the program, we adjourn to lunch which is made up, generally, of sandwiches (pimento cheese, cream cheese and olives, etc), jello salads and the most yummy desserts..pies and cakes that look like they came from magazines. Each month one of these delicious lunches is made by a particular circle. They take turns throughout the year.

I suppose it's a little antiquated, although from reading way more blogs than I should, I know that there are women out there who would love these kinds of meetings. So, where are they? I wonder if these women who have been doing everything are tired? Do they worry that there will be noone to take over and let them rest a little? Do we all rely on them just a little too much? How long has it been since they just went to church and enjoyed an event from the pews rather than from the kitchen or from just outside the door?

Well, thanks for letting me ramble on about this. I used to write things like this in a notebook where they didn't bother anyone. lol Now I make you suffer through them.

I started out posting just to let you know that I'm fine; just busy...and now look. I hope everyone has a good day. I'm attending a funeral at 11am. After that, I have no plans.

Tim finished the shed yesterday! yay! So we'll probably spend the day clearing spots that have been driving me crazy for a few years. I'm pretty excited about that. Flylady is wrong. You can organize clutter. ha!
Posted by Lisa at 5:46 AM

I guess nowadays not so many ladies are at home during the day. We have a mother and toddlers group which is a joke really as it's all grandmothers and child minders and toddlers really, lol.

Prayers and hugs too.

I think most churches lack a group aimed specifically at younger women, excepting mother and toddler groups. I went to the one in our church briefly, but the kids didn't have any organised activities and I felt elderly in experience, even though I am not an older mother. Most of the women were approaching or in their 40's, career women and first time mothers. It was strange compared with my previous playgroup experiences!

I think that's true with a lot of volunteer positions nowadays, secular as well as church-related. I went to a League of Women Voters event, and of all of the actual members and officers, I think the youngest might have been 65. Thanks for providing further food for thought.
Funerals are never easy. I hope the rest of your week goes well.((Hugs))

Wow Lisa. I have been away from your site for a couple of days and have been checking out what I missed. Lots of eye candy. LOVE that home made paper. Lucky you. Your home is so Christmassy....I think it's wonderful. I've found the same thing about volunteers at the art center. They are all older ladies and gents. I guess the young ones are out partying...well, I did when I was younger also so I can relate. My life was too busy to miss a minute by volunteering somewhere. A lot of people don't "find themselves" until maybe middle age or so, you think?

You know I think you're right in saying that younger women would definitely appreciate these meetings. I imagine there is a wealth of wisdom in those meetings. But the sad thing is that SAHMs are in the minority nowadays, no wonder the older women are still the backbone of the church...