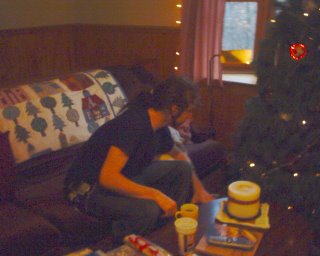 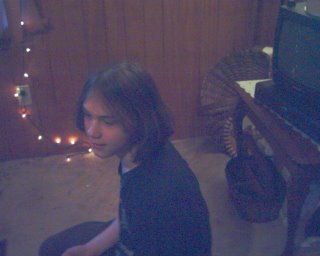 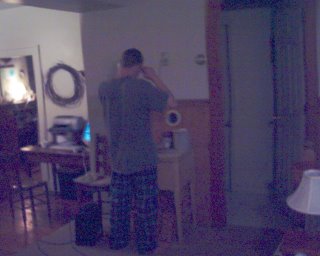 I took these pictures knowing they would be really dark and hoping I could fix them on the computer. My program didn't quite cut it, but Nick showed me another one that did a pretty good job.

Here are Nick and Michael as we were gathering our gifts and Caleb was on the phone telling his favorite aunt that he loves her.

Michael was Santa, handing everyone our gifts. I had way too many. Tim says that's coz I'm the Momma. 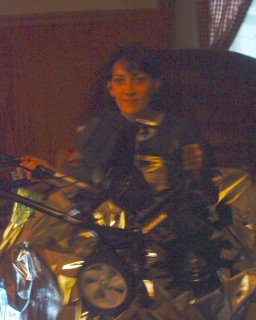 ATiller The Hun! This was my big gift that I never would have guessed. lol A tiller. I can't wait to start tearing up the dirt and putting in pretty flowers. Between the shed being built and my new tiller, things should start shaping up around here.

We had a really nice, quiet day. I pretty much glitterfied everything in my path yesterday. I had so much fun. I've had a real dry spell in the creativity department but it all came flooding back yesterday (and a little the night before) and I just cut and glued and glittered and had myself a merry time.

Nick's girlfriend (well...they won't say they're dating but if it walks like a duck and quacks like a duck..you know...chances are...) anyway, she came over last night and brought us a plate of cookies which are very good. I thought that was sweet of her. She brought Nick's gift and he gave her the absolutely stunning steel rose he made for her.

Michael got video games from Emily and he got a DVD set of Mystery Science Theater 3000 from his dad that he brought with him, so he enjoyed that a bunch yesterday. He and Nick received a guitar from their stepmom and Mike spent a good hunk of yesterday learning the tabs for one of the songs from the Nutcracker. He did great.

I was happy when all the girls left (lol) and I could turn out porch lights and lock doors and actually go to sleep.

Tim made all the Christmas fixins'. He made ham, green bean casserole and sweet potatoes. It was yummy. We really don't sit down in the house all together. I don't know why. I think it's a wonderful practice and we sort of thought that would happen yesterday, but it worked out fine as it was. Emily, Tim's daughter, called while he was eating and she and I had a nice conversation and then he talked to her while I ate. LOL The boys sauntered in and out of the kitchen eating when they felt like it and it just all seemed ok with me.

Our laid back lifestyle would probably make some people crazy but it seems to work for us. I will admit to wishing I'd been a little less laid back about cleaning house when those girls came here. hehe but...if I get all bent out of shape about it, I end up aggravated at men who could care less, so I figure I can create peace at least in my little (messy?) corner of the world.

I hope everyone had a loving day. Ours was pretty good and I'm glad it's over. :) Now...to "UNdecorating." I love that as much as decorating.

Tim got me a beautiful table cover so I'm anxious to replace the Christmas runner. I'll try to get pics of some of the beautiful things he bought. He went a bit overboard this year...but I'm not complaining. ;)
Posted by Lisa at 9:41 AM

Sounds like a lovely day to me! Ours was a little too un-quiet at times!! I love having the family together, but I am exhausted now! Used my hip as a reason not to clean too much...can't use that next year, tho'.

If it made you happy, if the way you spent your day with your family gave you peace..then it was the perfect day no matter what you did. You deserve all you receieved dear Lisa, for your generous spirit and yes, because you are the momma too!
Tea for the Tillerwoman....that's what sprang to my mind. I see an art piece..hmmm.
I will say again how glad I am that you have happened in my life!XOXO
Lisa

Oooooooooooooooooooh - I am so envious...I always turn my dirt by hand with a shovel...but my shoulders are really giving out on me as of late - and I would love the damage I could do with a tiller...

Sounds like a lovely, peaceful day. Sometimes the "mess" of the holidays gets to me too, but I keep prioritizing. Right now I wanted to send my love to my blogging friends Much More than I wanted the toys and things put away.

Thanks for sharing you!
XO,
Melba

I love seeing everyone's Christmas! It makes you all that much more like family!! LOVE YA!!!! Only a true glitter sister would know how awesome a tiller is!!!!----PAM ARIES! (blogger wouldn't let me sign in...duh...)

Wow! A tiller , I think that's a wonderful , magical gift.Wishing you a belated Merry Christmas.

Wonderful day!
Great to read about all our families isn't it!

Any chance you can post a pic of that steel rose? Would love to see it!

Hi Lisa, It sounds like a lovely day. What an amazing woman you are to create a home where your children and their partners feel free to be themselves.

Lisa, you could be my friend that’s for sure!! hahah....love your Christmas...very realistic in my books...you definitely go with the flow...makes things a lot more peaceful....and everyone has a soft place to fall! I loved the “ATiller The Hun!” reference… great giggle to start my day!

That's so cool that you got a tiller. Do you usually plant a big garden??? Glad you had a good one.

Happy post-Christmas Lisa! Awww your piccys made me wish I lived over t'road, it looks so lovely and homey.

Yey for your Christmas present, there's nothing like agricultural machinery to put the sparkle in a girl's eye ;)

Hugs and love to you and your own.

Lisa - sounds like the perfect Christmas to me. Spending time with your boys. Love the photo of you with the Tiller. Am sure you will get a lot of use out of it.

I would have loved your Christmas present!!! I thought I was the only one that wanted a tiller...tee hee :)


Your Christmas sounds perfectly normal. The majority of us have dust bunnies flying, cobwebs hanging somewhere, a chair moved over so it's crooked, dinner that is ate on the fly, I think I'd take laid back over stiff and uncomfortable any day!