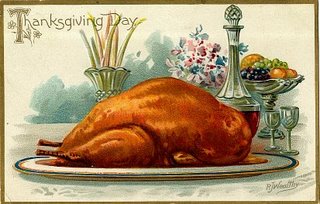 I hope everyone has had a beautiful and loving day. (Whether or not you celebrated Thanksgiving today). There were only three of us here, today. My boys went to their grandmother's house with their daddy. And Caleb (Tim's son) spent the day with his girlfriend's family. She is really sweet. So it was just Tim, his mom and me but we had a very nice dinner.

Tim cooked tons of yummy food. I made the cranberry sauce. Yep, that's it. lol He loves cooking Thanksgiving dinner and this was the best one yet. The turkey was beautiful and all of the food was delicious. The whole day ran very smoothly and calmly. He would cook for a while and then I'd go in and clean up the kitchen so that he could start all over again. Now he's watching Eureka and I'm here, dishes are done and food put away.

I called the boys this morning and they were enjoying waking up at Grandma's house.

I talked to my mom yesterday and she was expecting a full house today.

We made an unexpected decision today. We have been without a stove for about a year or so now. We've gone out and looked at the drop-ins (because that's what we have already) and I could never find anything that I really liked. It's electric and the options are not as good as the gas ones. The electric ones are a lot more expensive, too.

We made a special trip Tuesday to Bed, Bath and Beyond to get a roasting pan that was on sale. With the rebate and everything it comes to about $4.00. It's really nice and was much easier to deal with than the smaller one we had been using. Only one problem, it wouldn't fit in the oven. Ha! No matter how we turned it, it wouldn't go in. We compromised and used it's floating rack with our old smaller pan..worked great. It was at this point that we decided to get a new stove/oven combo; the old fashioned kind. hehe. We decided to put it where I have the baker's rack (and I get it back for the dining room, yay). Then Tim was concerned with the hole that would be left by the drop-in stove (that is there but not working now) and I suggested a large chopping block to cover the hole. How handy would that be??? He loved that idea. Later he said that he thought he had enough nice wood to make one himself. That would be so nice. My chopping boards are never big enough for all I want to chop, plus there will be more counter space for other things if it isn't taken up by the chopping boards while I'm preparing a meal.

I am very excited at the thought of a real stovetop/oven. We'll have an extra oven. There's no need to get rid of the built-in oven. It works wonderfully, so we'll just have two. That will be really handy, too.

Tim was really irritated, at first, that the pan didn't fit but it ended up being a good thing. :)

You might be wondering how I make meals without a stove. I use a variety of things. It can get tricky sometimes. I have an electric skillet that I use for frying or boiling. It's about two inches deep, and it's great for cooking lasagna noodles or spaghetti because they can stretch out. I use the oven a lot and the crock pot. (Tim has soup from the Turkey broth in there right now, yum). I recently bought a sandwich iron and it works great for cooking vegetarian patties and hotdogs for Nick. We've even used it for eggs and to cook pork chops. I don't like using the microwave for cooking very often, but I do usually steam broccoli in there. A bamboo steamer works well in the skillet also.

Sometimes I forget and have too many things that need to be boiled and have to do some juggling but usually it's just fine. Having burners will be really nice, though. lol

I am really rambling on, aren't I? It's been a really good day even though I really missed my boys and I always miss going home and seeing my family. Debra reminded us all that we can choose to be thankful for what we have or we can wreck Thanksgiving (and every day really) by grumbling because things aren't the way we think they are supposed to be. I decided today that it's time for me to be grateful. God has given me so much. My life is so rich and full. I hope to keep this spirit of Thanksgiving in my heart all year long.
Posted by Lisa at 6:07 PM

So glad you had a beautiful day! We all have much to be thankful for. How fun it'll be for you to get a new stove. Sending quiet gratitude to you for all you do!

Lisa,
I am so pleased you enjoyed your thanksgiving feast! what a great day of piece and quiet you must have all had.

I love that you are getting a new stove and oven what a great thing they are too. our oven has kicked the bucket!! :o) (died! lol lol) so we are looking around for a new one also.

enjoy your evening my friend.
Lee-ann

I'm glad you had such a good Thanksgiving. I'm also very excited about your new stove as I understnad the "power" of a good old-fashioned stove. I dream of Agas, but my kitchen is too small. I think your sentiment at the end of the post is the key to a happy life. Counting your blessings seems so old-fashioned, but when you really reflect on things you realise life ain't so bad!

I enjoyed your meandering story. Bless you my friend!

It sounds like you had a wonderful Thanksgiving! And I LOVE the story about the stove! We didn't have a couch for many years and the kids never seemed to mind. We finally got one a couple of years ago and I don't think anyone but the dog and the insurance salesman has ever sat on it. The kids (and we've had 7 here for the holiday) still prefer the floor and the cushions and the footstool, so don't be surprised if you keep dragging out the electric skillet.

Yeah!!!!!!!!I love that you worked around it for so long...I think that is marvelous - not only does it mean you took the time to make a wise decision but it also increases your gratitude for what you will have...

Glad you had a nice Thanksgiving, Lisa! It sounds so peaceful. I'm truly happy for you getting a new stove - and the chopping block area sounds like a great idea.

I am glad you had a lovely day. I think it would be tough not to have a stove top. In college I had an electric fry pan and I remember it working really well.

Oh no, lol, I've had a similar problem, our kitchen is small so we have a slimline cooker which doesn't always fit everything in. Glad you are getting a new stove out of it though...don'tcha just love a happy ending ;) I'm with plainandsimple I dream of a huge farmhouse kitchen and an aga...sigh every English girl's dream :)

Glad to hear you had a wonderful thanksgiving :)

Don't feel alone Ms. Frog. I don't have a couch! My grandaughter had an accident on it almost a year ago so I got rid of it. I have looked and looked and looked and just can't find the right one! So.....I have two chairs and a coffee table in my LR. LOL Whatever works, huh? I can relate with the stove. I need a whole new kitchen! Sure, coming right up! LOL