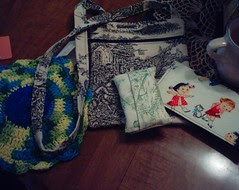 Craft fairs
Originally uploaded by GroggyFroggy.
I had to have Nick at school this morning by 7:15 so I was up and at'em today. After I dropped him off, I came back home and had some toast and coffee and then headed out to a local craft fair.

One of my favorite blog people is Cindi at Cindi's Sewing. I walked all over the fair...all the way through about 4 or 5 times and was ready to go home and still hadn't found Cindi. Then I heard someone mention an elevator so I asked if there was more upstairs. Yes! As I started up the steps, there she was. I'm so glad I didn't leave before I found her. She really is a sweetie and I'm glad we've become friends.

The black toile bag and the tissue cover are both from her. She had a great booth filled with her different styles of bags and tissue covers, aprons and some other things. Tim took one look at them when I brought them home and said "She does quality work." (He's picky).

Last night when I was searching the internet to figure out where I needed to go for this fair and when, my search pulled up another Roanoke Craft Blogger. She goes by CraftNana...and NanaSadieRose. I was looking for her there, too and was lucky enough to recognize some of her stuff from her blog pics. We talked for a while and I bought that adorable checkbook cover with the vintage kids. Isn't that great? She makes bags for a living and knits for fun. It was funny..on one of my (many) trips back through the fair, I heard "Hey Frog" LOL It was this nice new friend wanting my phone number. Every time I think of hearing Hey Frog it makes me laugh. I loved it.

The other crocheted thing is a pot scrubber. It's a round dish cloth with a plastic scrubber in the middle. The woman said she started making them because someone said that they used to buy them from a churchlady who made them but the lady had died and they no longer knew where to buy them. So this lady figured it out and began making them. She only had 4 or so. I just had to try one. I love crocheted dish cloths anyway.

I also bought a new Thimbleberries quilting book for half price. I forgot to include it in the picture. I was looking at it a bit ago and, well, fell asleep. Yummy nap.

After my nap, I took Tim's mom her lunch, put a roast in the oven and put on a pot of coffee and intended to sit and blog but while looking around I became motivated to put a coat of paint on the front door. I primed it last week and then it got cold and rainy. It's a little chilly today but dry and I thought I'd better do it while I could.

Are you ready for this? 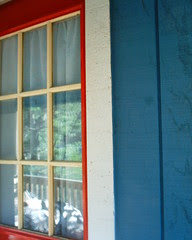 This is just the first coat, and obviously the window trim isn't done yet but I really think I'm going to like it against the blue of the house. There is so much to be done to the house but this gives it a little pizzazz. I can already see I'll have to hang new curtains on that window. I think the rest of the trim around the doors and other windows will be white. I don't know if I'll get to that before winter or not.

Now I'm having that coffee and having a look around the internet. Michael is working some sort of puzzle and watching "The Jerk." One of my all-time faves. lol "He hates these cans...stay away from the cans." Yeah. Great line. Nick should be calling soon for me to pick him up..probably about the time I'll be finishing up making supper. lol Isn't that how it goes?

Have a nice weekend everyone. Mine has been fun so far. :)
Posted by Lisa at 3:31 PM

wow, sounds like you had a fun time at the fair :-)! and lots of great goodies, well done xo

what a great way to spend your Saturday...and how delightful to meet fellow bloggers and buy some of their wares!! Bon Appetit for your yummy sounding dinner!
XOXO

Cool that you met two fellow bloggers! And yes 'pizzazz' is the right word :)

I am so glad you had a nice weekend. It sounds like fun. The dishtowel with the scrubber sounds like a great fins.

What a fun and productive weekend - meeting up with fellow bloggers, a cheery cherry red front door and lots of goodies!
Hope the rest of your weekend is as happy, Lisa!

Sounds like you had a great time at the craft fair Froggy! I am happy you got to meet some fellow bloggers (it really is a small world).

And your stash looks fabulous (as does your painting!).

Yes, you did have great fun! I would love to meet up with ALL you gals at a fair!!!! Wheee OOOO

I read about your purchases the other day and have been absorbing them since...it sounds like such a satisfying excursion.

I like the color combinations on the door just the way the are now!!

Lisa you are just too nice. I had fun. I have been thinking about your bag. E-mail me about whether it has cloth for the pull handles or a cord type thing. Does that make sense? Oh, oh and the dimensions! You know how long and wide you want it. I have an idea and wanted to try it out to see if I could make one. By the way if you can look at a picture of a knitted pot holder and make a crochet one you can sew a back pack thingy from one in front of you. Don't underestimate yourself! I love you.

Robyn, I sure did. thanks!

Lisa, It is fun meeting blogging friends. I sure hope I get to meet you one day.

Sarah, It sure is red, huh? lol

Melba, I haven't had the heart to use the dishcloth yet. lol

Tinker, thank you for the wishes. They came true. I had a very nice weekend.

Julie, I rarely get myself out to them. I think that's going to change. I enjoyed it alot.

Dotee, it is a small world, indeed!

Pam, We're going to have to have an East Coast Glitter meeting and invite everyone. :)

Me, thanks! It would be easy for me to be tempted to leave it that way. lol I do not look forward to taping off those little windows.

Cindi, I'll email you but I have to tell you, your bag is fitting the bill. I love it. It's the perfect size and is really comfortable to have around my neck and is really handy for grabbing my wallet. (But I bet you could sell the backpacky ones, too!) I love you, too.

This window is so inviting, the colors are ideal! Great shot!