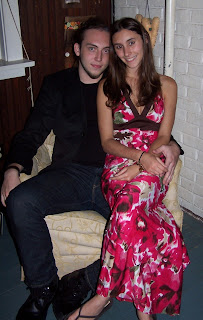 Nick and his girlfriend stopped by after going out to dinner last night. Don't they look pretty? :)

I don't have any crafting to show. I spent most of the morning doing Roanoke SuddenValues work and then just puttered around cleaning and moving a few things around.

I am on inspiration overload having found so many pretty home and stitching blogs. I had some money from selling a doll and I spent most of it today on some flour sack dishtowels. I can't wait for them to get here so I can start stitching them.

I was thinking I may make new kitchen curtains with them until I realized it would probably take 4 per window and since I only ordered 10, well...I may fall back to plan A. I saw some curtains in an old Pottery Barn catalog that looked very similar to the ones I made last fall but they had ties and were hung from cafe rods which just made them cuter. I'm planning to revamp mine with ties and I know I've seen cafe rods really cheap at Family Dollar. There will be pictures when I get them finished.

I've really been itching to sew but then I go to my little space and just stare at the machine. Is there such a thing as too much inspiration?
Posted by Lisa at 4:20 PM

redoing things in the house is so much fun! Your plans sounds great!

I recently hung a pair of curtain I had in storage up in the dining room, put out my table runner and some fresh flowers and it was like a new room!

I plan on making a dress out
of cafe curtains with ruffles
for dgrd.

Sounds like you have some
fun plans with projects.

PS. Cute Pics of the Kids!!

Yep..sometimes it is definetly overload!

The overload thing happens to me!! A brief time out usually solves the problem!! Love your blog.

Yes! I get inspiration overload all the time. My mind whirls in all directions wanting to do everything. I can't wait to see what you do with the flour sack towels. My mom used to embroider those days of the week pictures on all of ours. I wish I still had some of them.