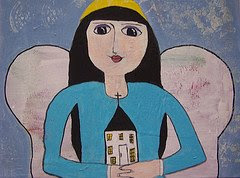 It's been a little while. We've been really busy with the business and after working on the computer all day, sometimes I just don't really feel like playing here.

Thursday I got a call from my stepdad that my mom was being admitted to the hospital. Her heart had been racing for a couple of days and, as is normal for my mom, she just kept going. My mom is 71 and works harder than most younger people I know. Thank goodness she had a doctor's appointment and when they took her pulse and blood pressure, they said she needed to go to the hospital immediately. She had atrial fibrillation which, unattended, can lead to a stroke.

Patrick and I quickly tied up loose business ends here and drove the WV that night and stayed until Sunday. I have an adult handicapped brother and was going to take care of him while Mom was in the hospital. As it turned out, Mom got to come home Friday night. We stayed anyway and had a nice visit. I tried to help out where I could but Mom was pretty insistent on "resuming normal activity" as the doctor told her she could do. I asked if the doctor understood what "normal activity" was for her. She just smiled and said, "probably not."

With all that said, she seems to be feeling pretty well. She is adjusting to having to take so many medications for the first time in her life. But if anyone can adjust and move on, it is my mom. She has taught me so much over the years about moving on through adversity. She had a very rough life married to my dad. She tried to make it work for 30+ years, even with a certain daughter telling her she should just leave him. Finally when there were no other options, she did leave him and a few years later a very wonderful widower, a minister I'd known and respected all my life, came by and asked her out to lunch. Before that, many men had asked mom out. She had been divorced from my dad for a while. She never would date. But when Gary asked her out, she didn't even hesitate. They were soon married and are blissfully happy together. They are two peas in a pod and it makes my heart sing.

When I did this painting a while back, I was thinking of Gary. He is a pastor. I'm not sure he was pastoring a church at the time I painted this. He thought he was retired until he began to feel that he was being called to pastor again.

On Friday, he drove us past their church and it actually looks quite a bit like the one the angel is holding. It isn't white. It has a stone facade that was popular around that area for a while. But still very similar. Maybe I'll give it to him one of these days. I plan to visit a lot more often. This was a bit of a scare and I realize how much I would miss my mom if she were gone.

I'm rambling now so I'll leave it here and go fix Patrick some breakfast. :) Much love to you all.

I am glad to hear our mom is doing ok. I also loved hearing about her life.

I'm glad to know your Mom's home and doing well again, but that must have been quite a scare for all of you. She sounds like one amazing woman, and it's so good to know she has such a great husband too.

You're so special, Lisa. Just special. I think that's a credit to your mom, don't you think? xoxoxo

Your mom is a remarkable womanm, and I am so glad that she's on the mend now. I enjoyed your "rambling" very much, Lisa; it always makes me happy to read love stories like the one about your mother and step-father, although what first got my attention was this beautiful, serene angel.

I love your painting!...I do hope your mom continues to be alright, as I'm I'm new to your blog and reading your posts out of sequence...What a nice way that your mom found love. :)