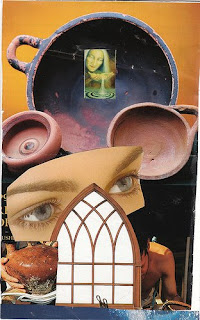 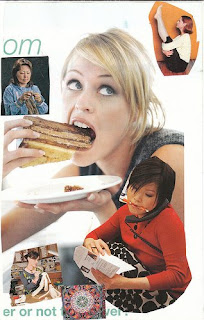 These cards definitely represent parts of me who wanted to be heard. Both of them have elements that insisted on being there.

I thought the top card was done but then I saw the face of the woman who seems to have magic running through her fingers and I just had to add it to the card so I placed it in one of the pots.

On the second one, the background image had words on it. It was an ad that talked about the woman getting a call frOM her trainer. I looked for images to cover the words. I found the woman knitting and thought it was perfect but then the image decided to go under the "om." I looked for other images to cover om but finally I heard the neter who was telling me that sometimes when I have burned myself out on "spirituality," the simple act of stitching (especially crochet) can make me feel grounded and centered.

These are beautiful. I especially like the second one and it really hits home for me. I'm the one who wants to do everything! And I usually bite off more than I can chew!

Lovely. Collage is so fun. It always makes me feel I am a kid again.

Lisa your soul collage cards are great. I too identified with the second one.

I'm glad my overwhelmed card was an inspiration. I can certainly relate to your Bitten off more than I can chew, card

love to you
xx

The cards are great darling,just passing threw to see whats new over here in you part of blog land

Gosh what a wonderful pair of cards. Receptivity contrasting with taking on too much. I can relate!

I love it ! Very creative ! That's actually really cool Thanks.