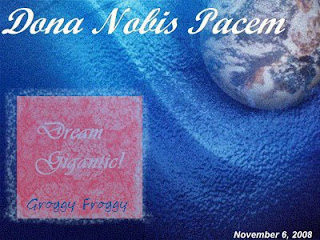 Today is the day! Blogblast for Peace, when folks from all over blogland whisper peace from our own little speck in the world.

It's not too late if you'd like to participate. Or if you'd just like to read what everyone is saying, you can go to Mimi's blog. She has a beautiful post written and then if you scroll down there are lots of links to others writing posts on peace today.

Peace. It's a word that's used a lot. I have friends who are always concerned with peace and out working for justice.

I, as most people I guess, wanted "world peace" but it seemed so far out of my realm of responsibility and ability that it was just more of a wish. A wish like wanting to win the lottery and then never actually playing the lottery...and then complaining that you never win anything.

It's always been easier for me to be a peacemaker in my own world. When I was a child, I remember my brother's wife calling me "the peacemaker" because I was always trying to explain one side to the other in an effort to clear the conflict.

That's been my role often throughout my life in my circles of friends and family and colleagues. It's one that comes naturally because I just don't like conflict and it's often easier to hear what people are saying to each other, and what they really mean by it, when you are standing on the outside of the conflict.

I've loved my role of peacemaker on a personal friend-to-friend level.

But it wasn't until I was introduced to the law of attraction (and the other laws) that I realized that I have a very real role as peacemaker on a global level as well.

What we can control is the way we think. What we think has very real effect. What we think is more important than policy, regulation, deregulation, the price of oil, wallstreet, mainstreet or the next Saturday Night Live skit.

The way we think in our own lives changes everything for us and for everyone who comes in contact with us and this is true of us as a nation, a global village, and as a planet.

If we could train our minds to truly see peace, we would have it. Not in a "poof, there's peace" way but I think it would be in measurable, visible ways for those with an eye to see them.

In fact, I think it's already happening. There are so many people who have been singing of peace for so many years. They were ridiculed sometimes. They were mocked. Or they were just ignored. But it didn't stop them. They stayed out there, instilling the words in our minds and hearts until finally one day, we heard them and the words took hold.

Those are the people who can be thanked when we are amazed by what transpired on Election Day. When our hearts bubble over with gratitude that this day has come, it is the people who have been thinking gigantic thoughts of peace year after year after decade without fail, that we should thank with all our being.

And then we should join them.

We should think peace. Visualize what peace would look like. What would peace look like in your every day life? In the world? On television? In business? In the land? See it. See it. Feel the warmth in your heart, the lump in your throat, the absolute contentedness of peace. Feel it. Smile. And know that it will come. Then live your life, peacefully.

It's powerful. It cannot fail. If we do this together, the Universe will make it happen. I promise.

Think peace, my dear friends. It's working. It truly is.
Posted by Lisa at 7:24 AM

Dream gigantic... I love that.

Have a peace filled day.

What an excellent post today! Your words speak to the unbridled idealism that has been screaming inside my thoughts over the last month, and that finally burst forth in expression today.

A wonderful blog friend...I see it. I really see it . And the more we believe in it ...think about it, live it, it will happen!
Peace~

Exactly! Manifestation - dream it and you can draw it to you.

The more, the more likely.

Peace wishes and dreams to you. :-)

Lovely post. Blessings of peace and love pour on your head today :-), and on the whole world.

Welcome to the peace globe movement. What a wonderful post.

Peace to you and yours,
Mimi

Thank you all for the wonderful peaceful comments.

Thanks for visiting my blog.

Dream Gigantic. Hmmmm...I can't think of any reason not to!

Great post. A Belated Happy BlogBlast Day to you.

(I just saw my name on your sidebar. Thank you! I'll add yours to mine.)

HI Lisa...Thanks for stopping by and leaving me peaceful and encouraging words. What a thought-provoking post. Beautifully written!
Take Care
Lani